Always coming back home to you

I love Clojure. I've written its praises many times, sold it to many people, and I am currently trying to introduce it at work.

Beyond of Clojure The Language (which is phenomenal), the ideas in the language will live on, and it's likely that in 20 years we'll all be writing in something that has at least some of Clojure's wisdom concerning state and time.

Despite this, I keep coming back to Scala and other MLish things (if you gave me 2 weeks off I'd probably pour it into Rust).

This really shouldn't be happening to me. Clojure is -- at this point, almost objectively -- genius on a symphonic level.

By comparison Scala looks like the Firefly-class transport ship Serenity: useful and attracting a colorful crowd, but you need a genius mechanic to keep it from falling out of the sky.

So why does a bucket of bolts like Scala keep on enticing me in the presence of Clojure's sleek simplicity?

Languages with ML-style static typing have been gaining momentum in the last few years on the promise that they make certain kinds of errors impossible, provide expressive types to aid in the design process, and help ensure refactorings maintain their contracts, while keeping the brevity of dynamic languages by inferring most types.

It's a subjective question as to whether these languages fulfill their charters, but for the one I know decently well, they do. At least enough to not be laughed out of the room.

What I wrote above reads like a list of features on a car. It doesn't say anything about the problem of trying to get from one place to another given the constraints of time, cost, safety, or fun.

So what are the problems? Why do I keep coming back?

At the risk of alienating any Federalists currenlty reading, bear with me on a slight tangent where I say that there are a number of essential problems to the software development domain that the people in our industry do not enumerate explicitly enough. The following list is not definitive but is relevant to my argument as to why I keep coming back ML-ish languages despite their flaws:

Though the above may sound like evidence-free truisms (that's because they are), I challenge any reader who has built or worked on any non-toy app to tell me I'm wrong.

Now, attempt to claw back some 8th grade alegebra, because these relationships can be explained with some simple logarithms and exponentiation. 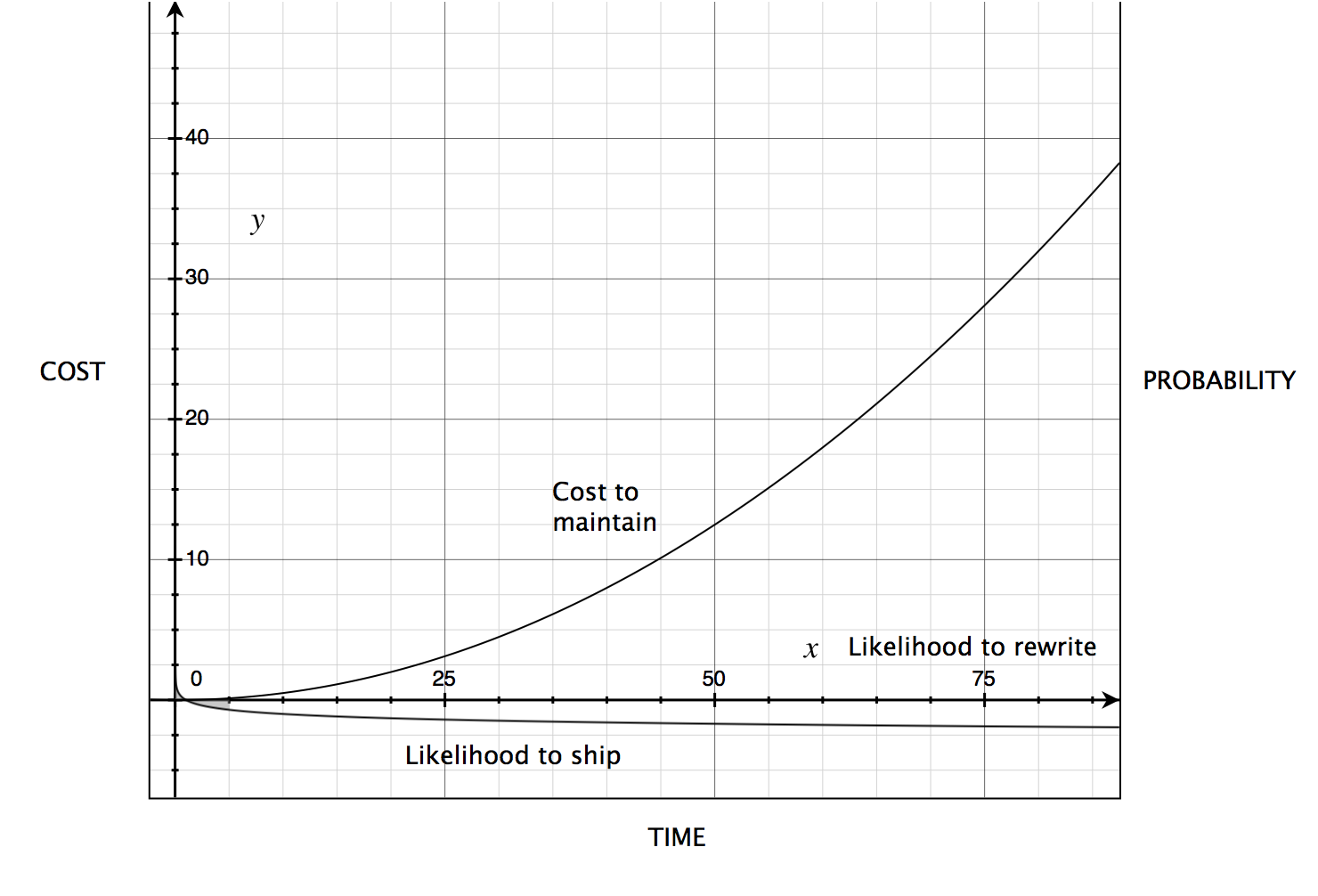 On a graph with time on the x-axis and cost of maintenance on the y-axis, most projects resemble y = x^n. That is, they rapidly become more and more costly to maintain as they age. For this function, think "SAP installation".

On a similar graph with y-axis now representing probability, the liklihood of throwing away/rewriting a mature project probably resembles something like y = -log_n(x), ie, projects are most likely to be thrown away early in their life but marginally increase their staying power each day they entrench themselves in an organization's communication structure and business model. For this function, think "Rails MVP app that sticks around".

This function also applies to the liklihood of a project shipping at all given its time in initial development: every day of development without shipping slightly weakens a project's prospects to ship at all. Think "The Big Rewrite".

Taking these together we see projects that ship end up sticking around, end up not being maintained, and never get rewritten because the complexity they accrue over time takes eons to reimplement, putting the rewrites at risk of never completing.

Imagine each of the above equations has a coefficient that modifies the amplitude of the function while retaining its behavior space.

When we develop software, this coefficient is where we spend our day. No one develops software with an ability to feel what the software will be like to maintain in 5 years, let alone 6 months. No one feels y = -log_n(x) or y = x^n at a personal level. We develop in the here and now, paying the price for every null, every botched config, every broken API, every slow ramp up after being away from the code for a year, every unintelligible abstraction.

And the impersonal area-under-the-curve cost (ie, real $$$ cost) of maintenance from time now - 1 to now is so much larger than from now - 101 to now - 100 that this coefficient begins to matter. If an ML-inspired typesystem can offer even a modest improvement for things like refactoring, or error reduction, or durability of design, this is real money and time that can be allocated elsewhere.

I find that Scala does this. It's easier to read, I have less fear changing it, bumping dependencies, or making significant cleanups. The compiler informs me of my idiocy if I botch an API contract. It's true there are costs, like learning some of the more theoretical abstractions inherent in this programming style (hello Monad, Applicative, Functor, etc.), but this cost is amortized quickly, and you get to keep the knowledge forever.

I'm not going to stop writing Clojure, or sellings its benefits to others -- its treatment of state and time is just too good. I just might be doing some of the more long-lived work in Scala.

I love Clojure to bits, but coming back to a Clojure project after time away can be a bit like blindly reaching into a box I've just opened after moving apartments: there might be something sharp in there.